I’m at the Los Angeles Sports Arena with my dad and brother. Throughout the month of June, my dad has yanked us out of school to watch live closed circuit coverage of the World Cup on the massive projector screen at the 16,000 seat arena.

Today is the final, Netherlands versus host nation Argentina.

Regulation ends in a draw, yet when Argentina scores the go-ahead goal in overtime, the partisan Latin crowd erupts into a revolutionary-like frenzy. I am ten years old and am soaked in beer from the rabid fans behind me.

When we get home after the game, Dad pulls out the globe and shows me where Argentina is. It seems very close to some curiously white continent called Antarctica.

After our layover day, Jeremy and I head out from Rio Tranquilo on the road that circumnavigates Lago General Carrera. Nothing but dirt, gravel, and a stunningly beautiful ride, with ever-present views of the lake and distant snow-capped peaks. It’s a road with vistas that demand you pull over and stop, every quarter mile or less, to shut off the engine and absorb the scenic splendor and perfect quiet. 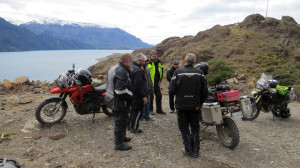 We come across a group of riders doing a BMW rental tour. Jeremy immediately pulls over and strikes up a conversation, while I stay on my bike with my helmet on, watching.

No matter my prickly personality, I am encountering many very friendly and kind people on this trip, yet I don’t gravitate towards them. In this environment, in this setting, on the bike, on this occasion, I am not here for extended comradery or companionship. The isolation within the helmet, the solitude of these desolate roads, that’s what I’ve been craving. Ultimately, I am poor company.

At Cruce El Maiten we bid farewell to the Carretera Austral as we head east on 265 toward the Chile-Argentina border and, once reaching Chile Chico, I bid farewell to Jeremy. He’s a good guy, interesting and intelligent, nothing against him. But he’s on a four year round-the-world schedule that allows for a leisurely pace, versus my whirlwind tour like a man with four weeks to live.

The border procedures are a bit humorous. First, you have to enter the Chilean border control, where you get permission to leave. Then you ride a few kilometers to the Argentine border control, where you get permission to enter. They want to know where you’ve been and where you’re going, as in, the actual address. I make one up. I don’t have enough Spanish in my arsenal to explain that I have no goddamn clue where I’m going.

Having come over the Andes, I expect the topography to flatten out rather quickly in Argentina. It does. I pass through Perito Moreno for gas and Argentine pesos before turning south on the famed Ruta 40, one of the longest highways in the world.

I press on southward to the settlement (smaller than a village) of Bajo Caracoles. Amazingly, a van filled with Scandanavian tourists has filled the only local accomodations, so I gas up again and put the hammer down for Gobernador Gregores, 130 miles further, with a broad storm peering from the horizon. Wind and rain alternately pick away at me as I race against darkness to reach the town; this time, I am the victor and get there just before twilight.