The Puerto Natales mechanic, who had assured me that he’d resolved the KLR’s ongoing issues, clearly had not. I immediately stripped him of his title as the Hero of Day 12. The chain adjuster bolts/nuts were completely loose (again), the rear tire had slid forward (again), so the chain was perilously loose (again), and the rear tire was crooked (again), now almost rubbing against the port side of the frame.

It was now 8:40 AM, and with my accursed alarm-assisted start to the day, I’d been on schedule for a planned 9 AM roll out from Puerto Santa Cruz. Until now.

“Well, there’s nothing for it,” I remarked to the cool wet morning. I had no time for chugging around village after village looking for the one guy who might know how to fix stuff; the clock was ticking on my Santiago return deadline. Besides, I’d spent so much of the trip watching other guys try to repair it, I might as well take a serious crack myself. Let the chips fall where they may.

I loosened the rear wheel, moved it back, and then did my best to get the wheel straight using the chain adjuster bolts. Once reasonably satisfied with the alignment and the chain tension, I sat on the bike, checked the tension again while under my load, adjusted some more, then tightened it all up.

So. Could I succeed where five mechanics (of uncertain ability) had failed? I had serious doubts. Rolling to the edge of town, I checked the time. My 9 AM goal had become a 10:15 departure. That by itself would not have been the end of civilization, but only an hour later and I was sitting still while a road grader worked on smoothing out a stretch of northbound Ruta 3. On the positive side, I took the opportunity to check out my repair. So far, so good.

Moving again, the 150+ miles between Puerto Santa Cruz and Fitz Roy (no relation to the famed mountain to the west) was some of the most barren riding yet. I imagined Mars to be like this: a burned out landscape that Sherman had passed through, then doubled back a few times to make sure he hadn’t missed anything. It felt as if there was nothing living or breathing. On my ongoing list of Amazing Places of Nothingness, I ranked it ahead of west Texas but just behind the all-time leader, the Australian Outback. 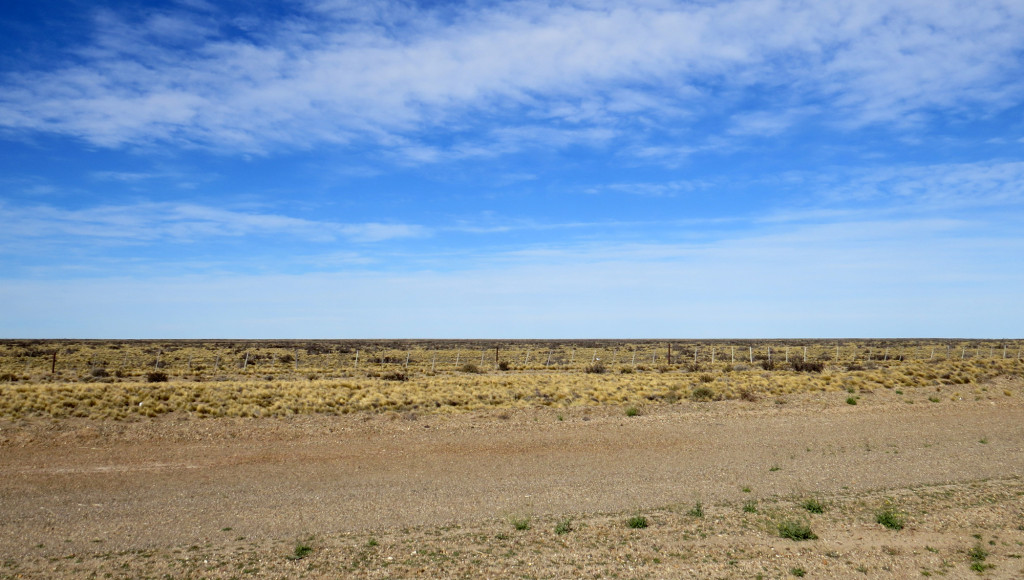 It doesn’t make for good pictures or good stories, but I have not minded these empty stretches of highway. It’s why I chose to do a solo trip, to see some of the remote corners of the world and enjoy their solitude. Whether wearing the backpack or on the moto, there is an indescribable liberation that comes from being in a secluded region of the planet. Somewhat inevitably, you must overcome an unreliable bike or a bloody blister doggedly attempting to thwart your progress, with nothing but your will and your wits to get you to the next gas, the next trail junction, the next camp site or the next hotel.

And eventually, it’s all you’ve got to get you back home.

Some people keep asking, “What do you do all day while riding/hiking, doesn’t it get boring and lonely?” Perhaps not coincidentally, these are the same people who can’t survive ten minutes without cell phones, tablets, computers, TVs, IMing and Twitter. I must be as much a mystery to them as they are to me. At the risk of over-dramatization, they’d rather be on an internet forum debating the authenticity of the latest superhero movie, I’d rather be a lone adventurer exploring Chile and Argentina, with Uncertainty and Unknown my only companions.

And really, I’m not alone. My family and friends are with me, whether they know it or not. My Blonde is with me, every mile. Jonathan drops by every time a distant snow-capped peak comes into view. Sean’s infectious laugh, whenever the chain falls off the bike or I fall off the bike. Kaelyn, whenever I pull out a different piece of gear. Ken, whenever I spot a rail line. Michael Scott, who more than anyone would have loved this moto adventure, should have been on this adventure. I could go on and on.

More construction and a lane-closing accident (no fatalities, thankfully) meant that sunlight was fading as I reached Comodoro Rivadavia, for a mere 350 total miles on the day. Far, far short of the 450 I had hoped for. I briefly entertained the notion of riding after dark, but in a rare display of good judgment, thought better of it. The KLR’s now non-functioning lowbeam and intermittent highbeam tipped the scales in favor of making camp.

I found a perfect place to pitch the tent about 30 miles out of town; it would allow for another attempt at an early departure, as I still had 1200+ miles to go over my final two days.