The chain and sprocket were broken. My detour through quiet residential streets, seemingly clever at the time, was now a serious detriment to my mission. The gazillions of cabs that had been trying to run me down were now nowhere to be seen, they logically patrolling only the major thoroughfares. It was 4:25 PM, tonight’s event would begin straight up at 8 o’clock.

“Never a cell phone when you need one,” I commented to a gray cat sitting on a nearby wall, peering at me with the eyes of the unimpressed. There was nothing for it; I would have to abandon the KLR, chose a walking direction and hope for a major street with some cabs. I also had not eaten now in more than 24 hours, and the Santiago sun was beating down with triple digit intensity.

I drank the last of my water and, after locking up the bike, began to stroll northbound where I thought I could see a steady flow of traffic about 3/4 mile away.

Fifteen minutes and lots of sweat later, I found a cab and then spent a few Spanglish-filled minutes attempting to communicate my destination to the driver. I clamored in, bought an ice cold water from a curbside vendor, and arrived at the rental place just after 5 PM. I quickly gave them the rundown, showed them the bike’s location on a map, and then I grabbed another cab back to my hotel. Rush hour traffic turned the seven mile ride into a 50 minute ordeal. Now, 6:15 PM.

I refused to attend tonight’s event smelling like a dung heap, so I jumped into the shower, put on my next-to-last clean shirt, and went in search of sustenance. Inhaling a sandwich as I hurriedly found the subway, I fought through the crowded platforms and stepped on the train at 7:00. Half hour later I disembarked and began to walk the final mile. At 7:50 PM, I reached the entry gates and handed my ticket to a faceless woman.

4,452 miles and twenty days later, I was here with ten minutes to spare.

I can’t understate the personal importance of this spiritual gathering. Certain theological issues have long tormented mankind, leaving him awake at night in search of knowledge, truth, and the answer to just one question: 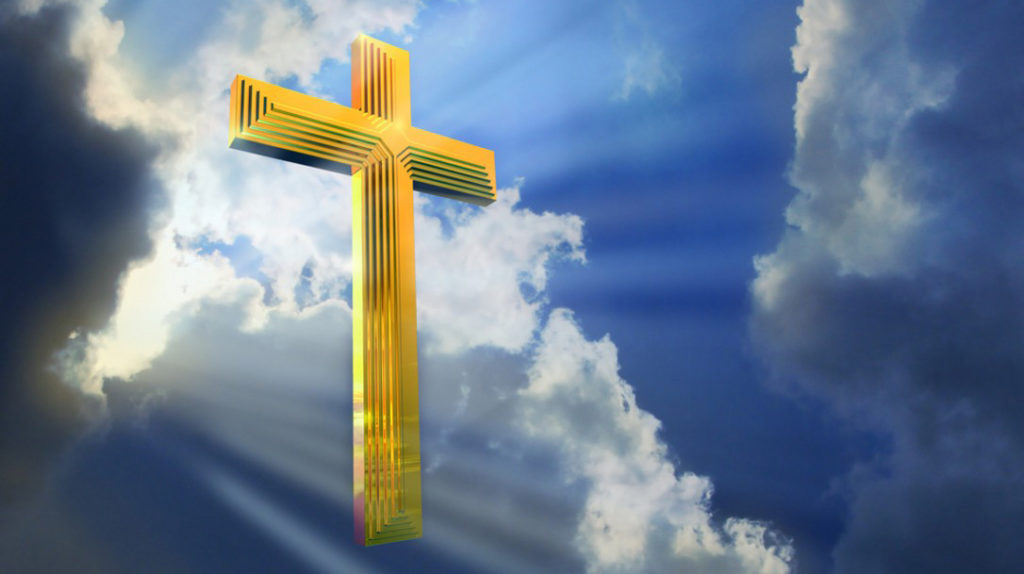 No, no, no. Not THAT question!

Is your head attached with a hinge?

It is the Estadio Monumental in Santiago. This was my sacred event, to join 47,000 like-minded people for communal worship at the altar of James, Kirk, Lars, Rob and the spirit of Cliff. 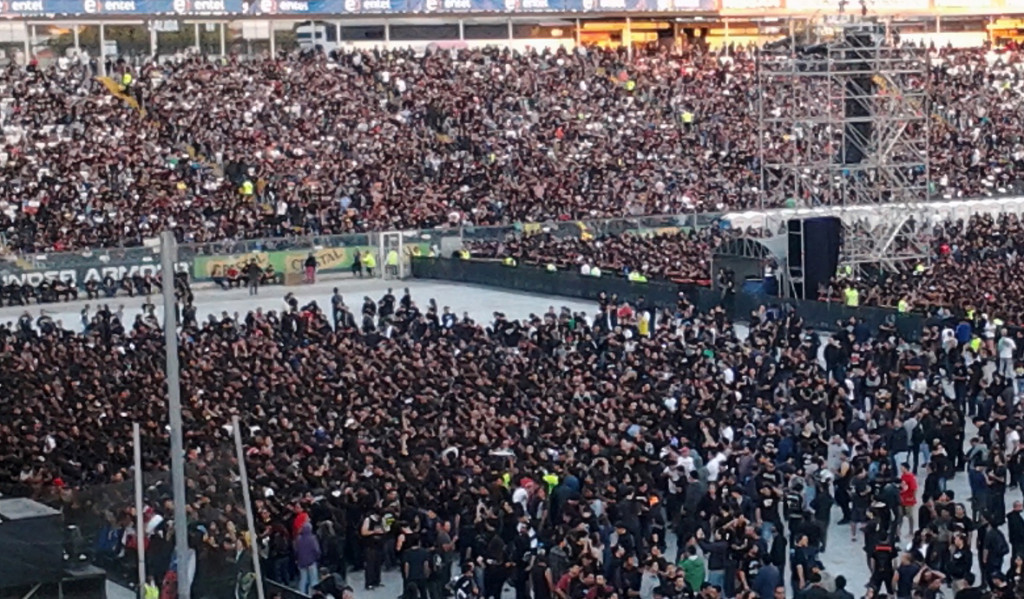 I slowly descended the steps that would lead me to the floor and the hive of general admission activity. For a long moment I hovered on the periphery, dumbfounded that I was here, in this place, at this time. Miles of riding over the past three weeks, battling the KLR’s recurring issues, harsh weather, crappy roads, rebellious housewives, indignant park rangers, tenting in backyards, sleeping roadside, sleeping in plush hotels, the bike’s final failure, all while suffering my own dual-sport inexperience and ineptitude. Yet none of it had denied me the path to this very moment.

The lights went out. The crowd exploded with fury and delight, again the fences were torn down, and above their crazed roar, I heard my own incredulous whisper…

“I fucking MADE it.”

“Ecstasy of Gold” began in its familiar way, with Eastwood, Wallach and Van Cleef acting out their standoff for the millionth time.

I am the mob. And the mob rules. 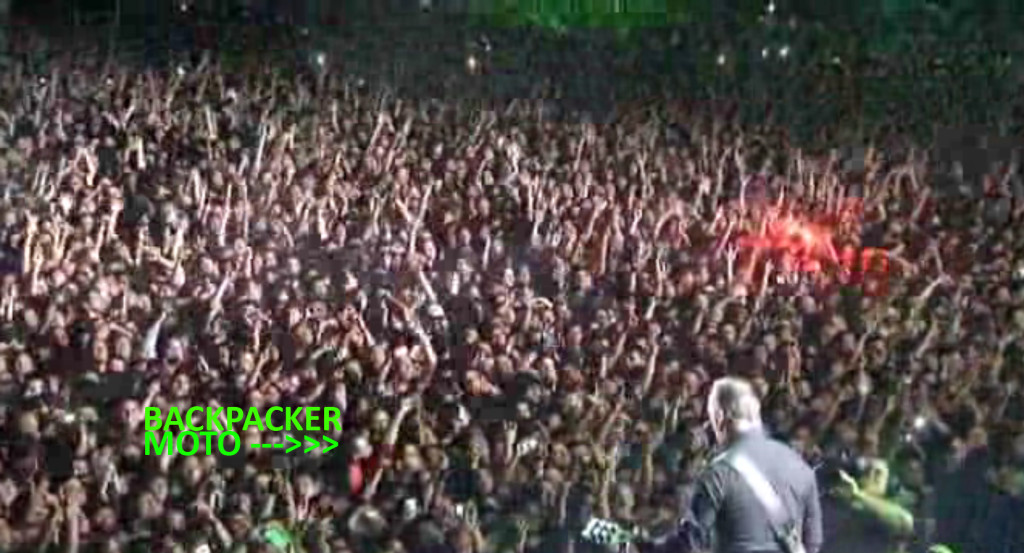 At 6’2″, the closer I got to the stage, the less popular I became. Turns out, most Latin American metal fans are considerably shorter than me. They did all they could to dislodge the Backpacker Moto Gringo, but lo siento mis amigos, I am a grizzled ageless veteran of a thousand psychic wars, countless pits, countless metal shows. And, I’d just finished three weeks of combating big rigs on RN 3, the ripio of Ruta 40, and gale force winds in Torres Del Paine. Tonight, you couldn’t move me with a fucking bulldozer.

The bat-shit crazy crowd surged like waves upon the ocean, and with each wave I expertly maneuvered closer and closer to the stage. By the end of “Puppets” I was dead center and only two bodies from the front barriers. Hetfield finished the song and flipped his pick into the crowd… and straight into my outstretched hand.

For the next two hours and twenty minutes, I celebrated that precious piece of fortune cookie wisdom: age is a matter of feelings, not years. “Seek and Destroy” closed out the show and the house lights flickered on. I was utterly spent, completely drenched in sweat, exhausted but still adrenalized. The only other tall guy in the crowd, a teenaged Chilean kid who’d been next to me for most of the night, gave me a triumphant high five. Grinning at him, I pointed to my chest.

His eyes became saucers. With unbridled Latin exuberance, he gave me a spontaneous embrace and in near-perfect English, he cried proudly, “You came all the way from the United States of America to see Metallica IN MY CITY!!!?!?!?”

Smiling, I hugged him back.

“Yes, brother, I did. I most certainly did.” 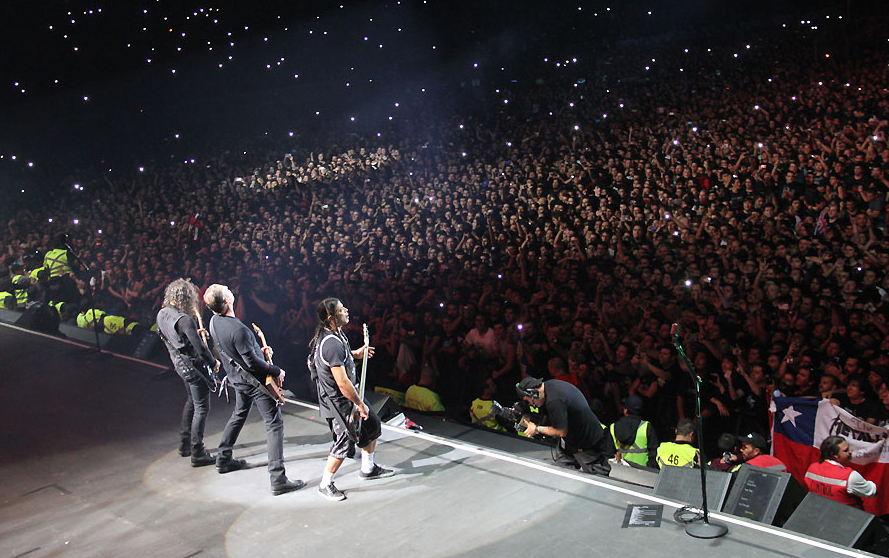 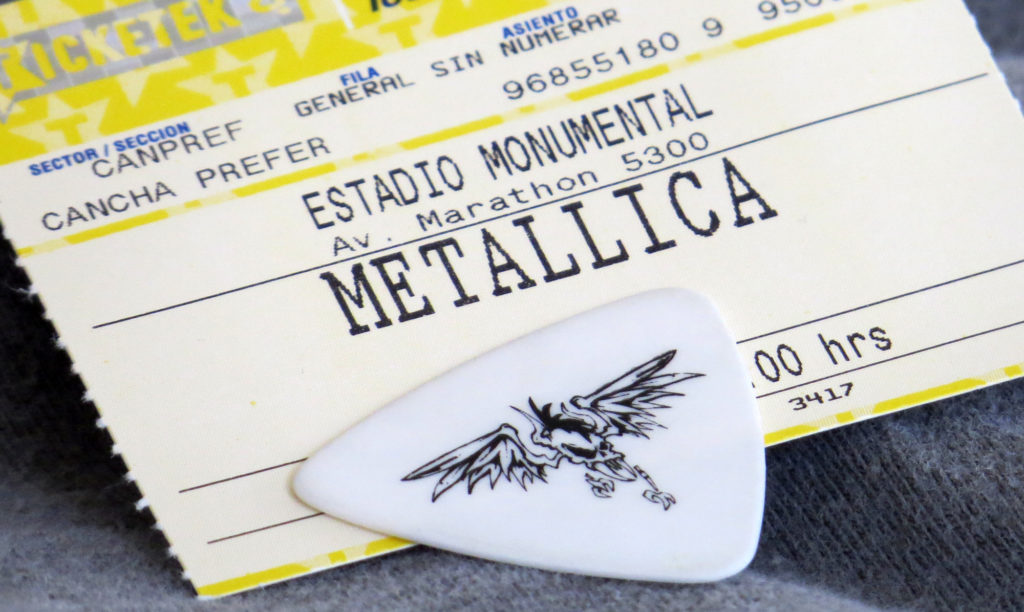