I encountered these two gentlemen about halfway there. By then, just ten miles from Puelche, the smooth pavement had long since transformed into a dirt “road” that closely resembled the surface of the moon. The chain had come off five times and was so loose I was able to just drape it over the rear sprocket. The appropriate wrench to adjust the tension… let’s just say it would have been perfect if the nuts had been completely round. 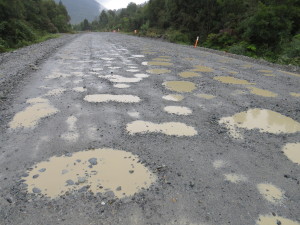 I was first-gearing it up the crater-filled lunarscape when I spotted Willi and Sergio working on a huge truck. Using my Señor Fish menu Spanish, I expertly explained my problem, roughly translating out to “Can you make my broken carnitas chain taco?”

Fortunately, mechanics speak a language that needs no translation: this dumbass wants me to fix his problem. And it took no words to illustrate the bike’s illness.

Willi (the talker) and Sergio (the worker) were reminders to me ( I need such things) that there are still some damn good human beings on this planet. They stopped their work to help me, in the pouring rain, in Sergio’s driveway, on the side of the Carretera Austral, in the middle of nowhere. Willi explained that Sergio lived there with his two children, the mere mention of whom made Sergio beam with pride. 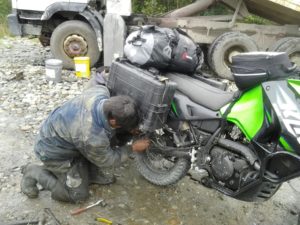 I was relieved that it took them considerable energy to loosen and make the rear wheel adjustments. I’d have had no chance. When they were done, they asked when I would be coming by on the return. I was instantly bummed that I was almost certain to come back through Argentina, and that I wouldn’t see them again.

They refused any money for the work, until I demanded and they humbly requested 1000 pesos each. I gave them 10000 each and feigned nothing smaller. They acted like they’d won the lottery, when it fact, it was me who had won.

I chugged away to their cheers and farewells. Me… I was elated and melancholy at the same time. 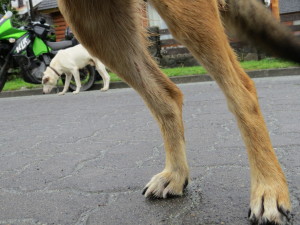 I reached Hornopiren having missed the ferry by 45 minutes, meaning I was stuck there for the next 23 hours. Surprisingly unperturbed, I decided to commemorate my arrival with a self-photo that would illustrate my dark and complex loner personality. Sadly/fortunately, my efforts were thwarted by an out of control roaming pack of dogs who kept photo-bombing me. They seemed certain I had snacks in the tank bag. They were right.

Next morning brought perfect blue skies, and the remaining two ferries got me to Carleta Gonzalo about 4 PM. Most folks choose to stay the night in nearby Chaiten, I opted for a few more miles.

I arrived in tiny Villa Santa Lucia, where the only hostel (four tin walls and a roof) was full. Just as well, I’ll take my tent any day over a shared room with Sven the Scandinavian who last showered in 2012. Toasty warm, I happily crawled into my bag.