Almost any man will attest: the older you get, the more you come to realize the merit of the lessons taught by your father, or the lessons omitted. As I’ve aged, I too have come to appreciate the values drilled (and that’s the best and only word for it) into me by Dad.

I wish he were alive, so I could tell him that. Been wishing that for 20 years.

He felt particularly strongly about the need for humility, and the dangers of too much pride. He loathed the type of men who loudly honored themselves. He admired the type who quietly and successfully went about their business, letting achievements speak for themselves.

One thing I am learning about solo adventure travel in remote Third World locales: there’s no room in the pannier for an over-abundance of pride. Sooner or later, you are going to have to throw yourself on the mercy and goodwill of your fellow human beings. Your humility may be all you’ve got to offer.

Relevance: the deep washboard moguls of Ruta 40 have shaken the rear wheel loose… again. My attempts to repair it have been futile. The chain is so loose, it won’t stay on more than 50 yards.

As the chain flipped off this final time, I parked the bike, shut it down, and pulled an apple from the tankbag. Dismounting, I took a few strides away and sat down. It was perfectly still and quiet.

“SITREP.” I stated flatly in my best Jeremy Clarkson. “I’m on the famed 115 km stretch of Ruta 40 north of Tres Lagos, renowned for horrific road conditions and 70-80 mph winds. The bike needs repairs, my tools/skill are insufficient, and I haven’t seen anyone for the past two hours.” 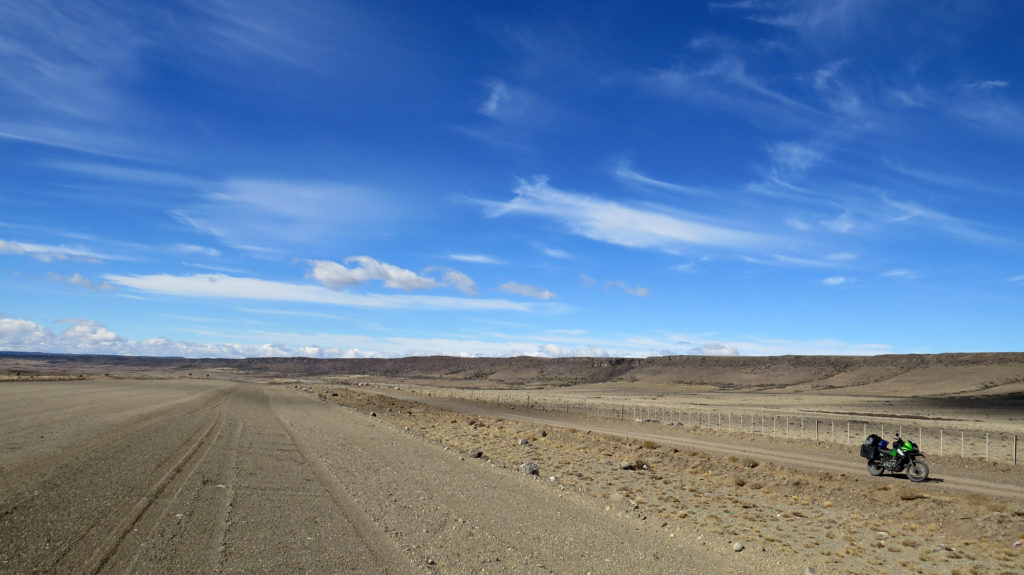 “On the positive side, I have snacks and water, the sky is clear and wonderfully blue, the gale-force winds that plague the region are nothing but a whisper, and temps in the mid-40s are quite pleasant.”

“You wanted solitude,” I muttered, snapping a few photos. I’ve been here 45 minutes. Still no one.

Another half hour or so and a distant trail of dust came lumbering up the road. I soon made out the silhouette. Tour bus. I concluded, optimistically/hopefully, that given the remote nature of this place, certainly the tour companies load up their buses with a few extra tools, if not someone who might know how to use them.

On a rare occasion, turns out I was right. I successfully flagged them down and humbly asked for assistance; the driver and his assistant (co-driver?) briefly conversed, gave me duel grins and thumbs-up, then got off the bus with a boxful of tools.

The bus passengers also disembarked and, to my complete surprise, were unperturbed by the delay. They stretched their legs, admired the utter remoteness of my mechanical malaise, and one older German fellow offered his assistance. He collects Nortons and BMWs. 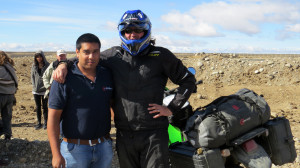 In fact, he shrewdly pointed out the problem… the bracket for the Scottoiler was bent at a bad angle and was keeping the rear wheel from ever being truly tightened. Couldn’t completely fix it here, but he was confident we could do a temp solution that would get me to a real mechanic. He also made a comment about the particular brand of chain on the KLR, a remark that I heard but didn’t quite understand until a few days later.

Collective efforts, led by the driver Gustavo, and after 30 minutes I was back on my way.

With about 20 miles to go before Tres Lagos, I rode up and over a crest and took a sudden faceful of blasting wind from port-side. Just like that, bike and me drifted two feet to the right, I was in the damnable bottomless Ruta 40 soft gravel, and PLOP, down we went. 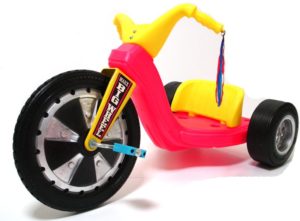 First time I’ve dropped a bike in my 20 years of riding. Not very spectacular either, I’ve had more impressive wrecks as a kid when on my Big Wheel.

The wind, from nowhere, was like nothing I’ve experienced, not even in three decades of backpacking 12,000 foot passes in the Sierra Nevada. I had trouble standing and keeping my balance, the wind was so strong. At 6’2″ and a veteran of heavy metal mosh pits, I’m usually not easily dislodged. This wind scoffed.

It took me about a minute to ascertain the wind’s direction and the necessary lean angle just to remain on my feet. The KLR, on its side, needed to be pulled up… into this wind.

I waited for a brief respite in the gales, and heaved the KLR back onto its wheels. Other than a crack in the right handguard, it’s fine. I carefully climbed back on, and almost fell again while standing still, as a strong gust slammed into me as I swung my leg over. Humility, man, humility. I got moving again at near-walking pace.

Half-mile later and I came across two Brazilians on matching 1200 GS; well, neither of them were on their bikes, actually. Both BMWs were on their sides. Their English was pretty good, and the three of us commiserated about the wind and road conditions, they both having simultaneously fallen from their mounts. We got their bikes upright, and I held each one in place while they respectively climbed aboard. Together, we putted down the ripio. 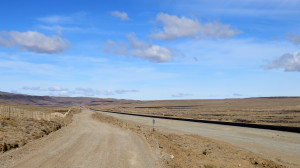 A deep gravel abyss of a road that was, incidentally, about 30 yards from a perfectly paved virgin highway. For ten maddening miles this went on. The temptation to ride over and use it was tempered by the now ever-present vigilant construction workers whose only job, it seemed, was to guard their new road against miscreants like me.

The wind subsided as we reached the village of Tres Lagos. The Brazilians opted to remain; I inspected the rear wheel repair, which seemed to be holding station. I rode another half hour before taking the 90 km detour towards Mt. Fitz Roy, which was shrouded in a late day storm. With no fanfare and no view of the epic Fitz Roy range, I motored into the mountain touristy town of El Chalten and found a room for the night.