Nestled perfectly at the base of Mt. Fitz Roy is the town of El Chalten, a charming locale that reminded me of a hybrid of Mammoth Lakes and Yosemite Valley. Lots of tourists but also lots of climber/hiker dirtbags (<– affectionate term). 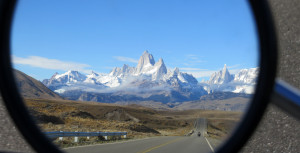 Yesterday’s late storm that shrouded Fitz Roy and Company has given way to a perfect morning, revealing this range in all its glory. My ride out of town was a visual wonderland; I stopped every half mile or so to admire the vast peaks punching holes in the blue sky.

With a somewhat forlorn glance in the mirror, I headed to the southeast. My hope was to reach Puerto Natales, the favored kick-off point for invasions of Parque Nacional Torres Del Paine.

Happy to be back on pavement, it was still some very desolate riding on this day, I saw perhaps one car per hour. I reached the intersection of Ruta 40 and the shortcut to Tapi Aike. The dirt road was just 45 miles, while the paved version through Esperanza was more than twice that. I pulled off at the intersection, enjoyed a “ham and cheese sandwich” that was typically just bread and mayo, and weighed the options.

I’d been unsuccessful in finding any mechanic in El Chalten who was interested in actually working, so I’ve pulled over every 20 miles or so to inspect the rear wheel. It was okay for awhile, but yesterday’s temporary fix was living up to its name.  The chain was loose once more, so I broke out the tool kit, laid down in the dirt, and adjusted the rear wheel as far back as I dared. It was now at its maximum. If this dirt road shortcut was in decent shape, I’d be fine. But if the ripio was more like Supercross whoops, then I’d be hosed. I pledged to ride a half mile on the dirt, see how it looked, then decide.

I got about 100 yards. It was another 20 mph moon crater experience, so I flipped a 180 and chose to take the long way around.

Once beyond Tapi Aike, I reached Cancha Carrera and again, had to decide between a short dirt road that would let me re-enter Chile at a quiet border crossing, or stick to the pavement and cross at the busier Rio Turbio.

I ached to take the dirt road, but it was 10 miles and the bookies had already placed long odds on my chances of reaching Puerto Natales. I opted for the border crossing outside Rio Turbio, and that turned out to be as enjoyable as a thousand fleas in the testicles.

See… the Argentines don’t really want you to find the border, because that would mean you’re leaving Argentina with your Yanqui tourist dollars to spend them in Chile instead. Rio Turbio is a, errrrm, rundown community with narrow constantly winding streets designed to confuse your sense of direction, and absolutely no signs indicating where the border was located. It’s a clever strategy.  Even the locals pleaded their ignorance.

This time, the wheel of fortune spun my way; using a perfect blend of blind luck and random guesswork, I was able to navigate through Rio Turbio, out the other side, and onto a deserted mountain road that rose into the clouds and, finally, Argentine border control. I felt like I’d found a lost civilization as I rolled up and parked. The agents had me through in a painless ten minutes.

The Chilean border station, a few miles further down the road, was a different matter.

I admit that my childhood memories of East German border crossings has always tainted my attitude when entering or leaving a  country. Power-mad officers asking moronic questions…

Why are you here? I’m on vacation (to undermine your feeble government and destroy your way of life, of course).

Where are you staying? Puerto Natales (at the Che Guevara Revolutionary Suites, thank you very much).

Is this your multi-tool? Yes (I use it to make pipe bombs and to torture captive policemen).

I force a friendly smile.

They poke, they prod, they root through your stuff. It only takes one authoritative asshole to ruin your day with a smirk while stating, “Your papers…. are not in order.”

On this occasion, my apprehension was well-founded. The tank bag, the panniers, my duffel, the Chilean agents wanted everything emptied, completely spread out on a table, inspected, explained, then X-rayed. The guy in line behind me had a pickup truck full of car parts and was brought to tears by the process.

It took 90 minutes to re-enter Chile. There were two people in line, counting me and the parts guy. I will state for the record, the border agents were unfailingly polite, if not completely humorless. 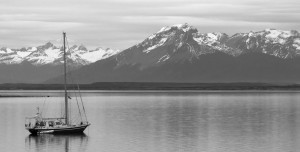 By this point, it was getting dark as I motored the wet downhill concrete road towards Puerto Natales. In no mood for an extensive hotel search, I rode straight up to the nicest looking place on the waterfront and checked in. I tromped up to the room and snapped a quick photo of the harbor, just before the sun went down.