My layover Day 11 in Puerto Natales was mostly spent watching the pouring rain and sleet come down at a sharp sideways angle, all from the warm comfort of my hotel room. I used this time to prepare my backpacking gear for an assault on Parque Nacional Torres Del Paine (TDP), and I also found a local mechanic who confirmed I had a crap chain on the bike. He replaced it, straightened the rear wheel, and gave the KLR a “complete going over”. Uh huh.

I set off this morning (Day 12) with blue skies and warmer temps (low 40s), yet the potent gusts blowing across the bay in Puerto Natales was a harbinger of doom. The forecast had called for 60-70 mph storm gale winds, and that was looking more or less accurate. Far off in the distance, gray clouds stubbornly clung to the peaks of the park.

By chance, I encountered a trio of Canadians who were also heading into TDP; they’d been riding 19 months since leaving Vancouver. We convoyed up as we motored north on Ruta 9.

They turned around at the 25 mile mark, deeming it too foolhardy to continue. Once the pavement ended and the road turned to gravel ripio, we were reduced to 10-15 mph, and the wind further increased its intensity. Two of the Canucks were blown over twice each, me once.

Though it would have been smarter to join them, I didn’t turn around for two reasons. 1) We were almost at the halfway point anyway, and 2) As I gazed ahead at the topography, I could see less of the wide open plains that were the mother of these winds, and more rolling hills and mountains that would provide occasional respite.

Though, those hills were still about 10 miles away. I watched the Canadians trundle back towards Puerto Natales as I took shelter on the quiet side of an abandoned shack, needing a bite and a think.

The wind that I’d encountered on Ruta 40 a few days ago had absolutely nothing on what I was seeing here. Cars, trucks and buses coming the opposite way on this road were struggling to keep their vehicles straight. Several tour bus drivers had chosen to park and wait it out. One shuttle bus driver offered to drive me back to Puerto Natales. Nice girl.

As I’ve mentioned previously, I’ve been riding for 20 years, but other than a paltry handful of dual sport outings on logging roads, it had always been on the street. The South American dirt, gravel, washboard, ripio, craters, that by itself had been a reasonable but not insurmountable challenge. By staying within my limits, I was doing okay and was learning pretty fast.

Into the park or back to Puerto Natales, the conditions would be the same. At least by going forward, I would end up where I wanted to be.

As I pulled the helmet back on, a giant tour bus headed into the park went chugging by. I laughed. My Puerto Natales hotel concierge had informed me that those buses take about three hours to cover the 80 miles to the park. I had grinned smugly, quite sure that not only could I beat that time on the KLR, but I wasn’t some soft-bottomed tourist who needed a reclining seat while someone else did the driving.

SITREP. I’d come half the distance in two hours, and those soft-bottomed tourists looked awful comfy in their out-of-this-goddamn-wind reclining seats.

Continuing at a snail’s pace down the road, I now added “wayward llamas” as something else to avoid running into. I later encountered a hitchhiker quartet who jokingly asked for a lift, they being the only creatures on this road looking more miserable and moving slower than me. And even that was temporary; half hour later they’d found a ride in a van and passed me by, another reminder that I was due a sacrifice to the Humility God.

Blissfully, about 90 minutes later, I reached those distant hills and got occasional relief from the wind. Though, the sides of the road still displayed the fresh snow that had fallen with yesterday’s storm. I was thankful the skies were clear, as the sun’s warmth was the only thing making this day tolerable.

Not too long thereafter, I rolled up to the park entrance, where it was somewhat similar to entering the Chilean border. Once again, “where are you going?” (ummm, in the park?) and “where are you staying?” (ummmmmm… in the park?) were the dominant questions. I then had to sign my life away, declaring that I wouldn’t camp anywhere but in their designated sites, and that I wouldn’t start any fires.

Sheltered now from the winds, I cruised the last few miles to the Las Torres Refugio, a bunkhouse-style place that was booked solid, a bit odd for the late season. Campsites were filled too. I briefly contemplated parking the bike, grabbing my backpack, and hustling the 3-4 mile footpath to the next campground along the “W” trail within TDP. It was time to put some “Backpacker” in Backpacker Moto! Though, it was now almost 5 PM and such an endeavor would suredly be in poor judgment… 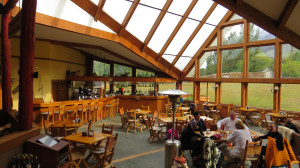 … especially after I checked out the nearby Hotel Las Torres! Shackled by my, errrrm, fierce lifelong devotion to national park regulations, I couldn’t in good conscience just throw down my tent in a restricted area. Reluctantly, I would have to settle for the hotel’s roaring fireplace, cold beer, hot chocolate, and tasty pizza. 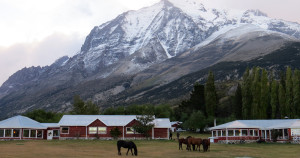 Dragged along by the cruel hand of fate, I reluctantly checked in for the night and coped with the miserable accomodations. As the sun went down, the stable hands did their evening routine of letting the resort horses roam the hotel grounds, roll around and eat the grass. No question, they were some happy, content animals, joyously free of whatever whiny, clumsy, overweight tourists they’d been forced to carry throughout the park that day.

Gazing over at my motorcycle, I reckoned that’s probably how it felt, too.