Next morning and I started my hike toward the center of the park, forced to backtrack a few miles of trail that I’d done yesterday. I marveled at the snow pack on the nearby peaks; you’d have thought it was spring and not early fall. 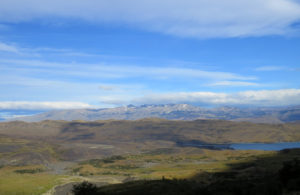 Last evening’s warm front was a fond memory; a brief clear morning in the low 30s quickly turned into more rain, clouds and gusty winds. Shortly past Campamento Italiano, park rangers exercised their right to restrict passage to certain trails. The gale winds were too dangerous, they claimed. Additionally, the catamaran across Lago Pehoé was not running, nor the boats on Lago Grey. To the protests of about two dozen people, the rangers requested that all westbound hikers remain at the campamento or nearby refugio/bunkhouse.

“Inconceivable,” I muttered, unimpressed. These rangers were becoming a serious impediment to my mission. As ever, I looked for a thinking rock to mull over the options.

Simple. I could stop and wait until the next day, hoping that they’d let me pass. Or, if the rangers weren’t going to let me walk to the western part of the park, I could retreat to the east and the KLR, and then ride to the west.

The days I’d lost due to the bike’s problems had finally caught up to me, creating a rather strained timetable. The uncertainty of just hanging out and waiting on the whim of the rangers, especially with the weather reports looking no better for tomorrow, sounded like a fool’s errand. At least the roads would still be open, as park officials dared not stop the flow of double-decker buses loaded with fat-walleted tourists. I smirked. It’s never quite THAT dangerous, now is it?

The rain continued to fall, the wind continued to blow, and I started my hike back to Hotel Las Torres where the KLR was stationed. Surprising myself, I wasn’t terribly discouraged. I was still riding high from yesterday’s four hours at the base of the Torres and the fortuitous parting of the clouds that I’d earned for my patience. 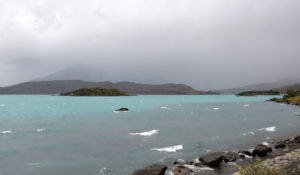 The rain and fog resulted in very little visibility and a perfect veil for some of the park’s signature views. By the time I’d returned to the hotel, loaded up the bike and donned my gear, it was late afternoon. The wind assault did not relent, and I rode about halfway to Lago Grey before camping the night near the southern shores of Lago Pehoé.

As warm, clear and comfortable as the previous night had been, this one was cold, stormy and soggy. The winds off of the lake were ferocious, yet my tent (Mountain Hardwear UL2) was bombproof. No matter the wind and rain, I was toasty and dry. The only other nearby tent was not up to the task; I heard its angry soaked occupants abandon ship at around 2 AM. Classic packing mistake.

Next morning was the worst weather yet; solid rain and the familiar wind. The going was as slow as ever, the fog heavy, the visibility suspect. It was about 10:30 AM when I arrived at Hotel Lago Grey, where the half day/full day boat trips out to Glacier Grey are launched. Even as I rode, I knew that if said vessels had been anchored all day yesterday, it would almost certainly be a similar outcome today. 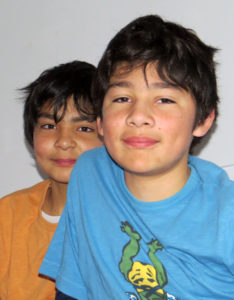 The staff at Hotel Lago Grey held out some hope that the afternoon would clear up enough to allow a half day boat. With nothing else to do but wait, I dried out in their bar and had some food with a pair of young Mexican boys who attend a Japanese boarding school; they spoke to each other in an enviable mish-mash of Spanish, English and Japanese. I call Unfair Headstart on life.

I then had a chat with two women from Santiago, who were also in a holding pattern for the boat. They were extremely interested in hearing about Yosemite and Yellowstone as future backpacking destinations, so they insisted on seeing some of my photos from those two great American icons.

Which ended up being the only scenery I looked at on this day. The boats were cancelled again, and from the hotel patio, all I got was this fleeting glimpse of the distant glacier… 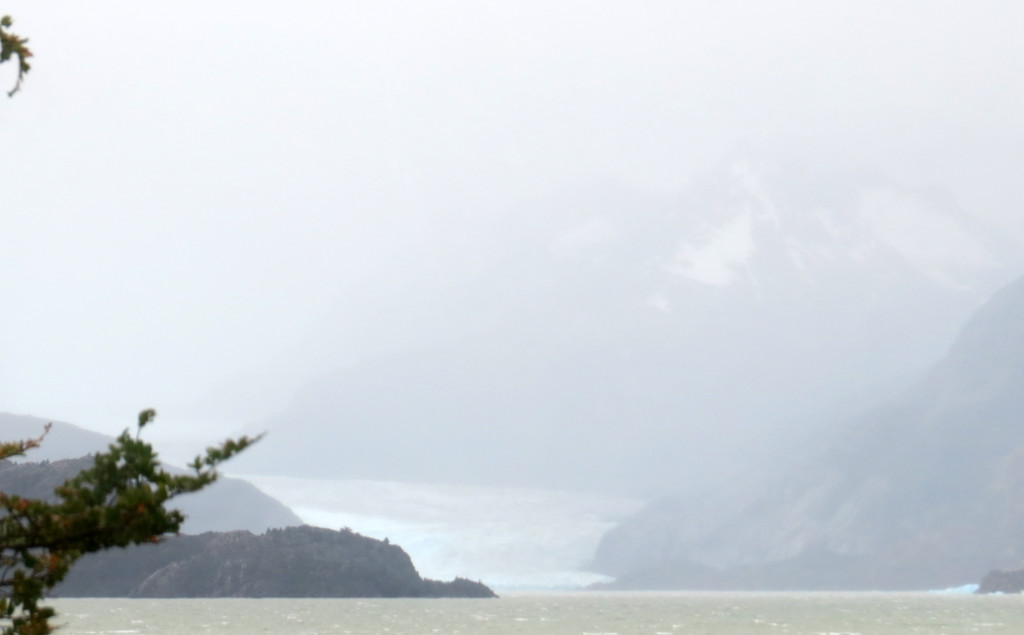 I wouldn’t know, but on a clear day, I’m told it looks like this: 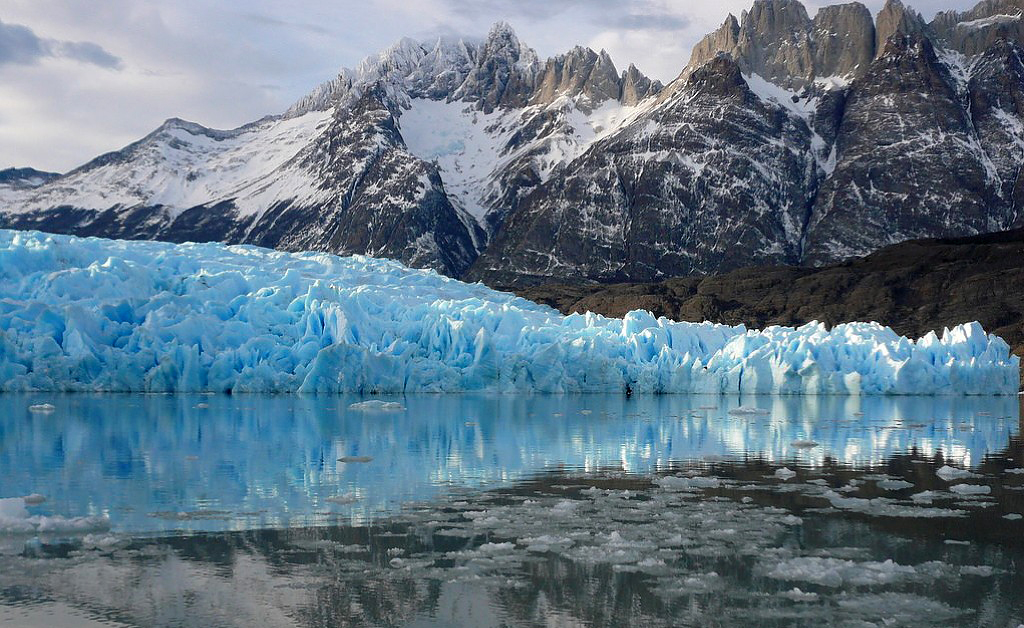 Sitting in the bar, I examined the calendar and tried to find a way to spend another day here. Tomorrow’s forecast looked extremely favorable, but there was no 7 AM boat, only one at 11 AM. I did the math. At best, I’d be done with the tour by 3 PM, then two hours to the park entrance, and another two hours (at least) for the 80 miles south back to Puerto Natalas for gas (contrary to what I’d been told, there was absolutely none available in the park).

That would mean a full 24 hour delay on the commencement of my 2200 mile ride back to Santiago. Given the pace of the bike (max speed about 70 mph), plus its uncertain reliability, and it truly seemed a bridge too far. I needed to retreat to Puerto Natales today and start my return ride on the morrow. 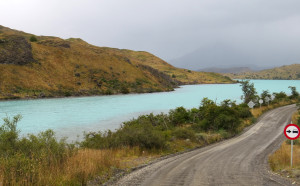 My emotions bounced around. I was initially bummed, but the destinations on this trip have become increasingly less and less important. More than ever, it really was about the journey, and of all the journeys I’ve taken in my life, never had that cliché been more true.

And, a large part of me was comfortably content that I’d missed out on some of the grandeur of Torres Del Paine. It meant that one day, when I return with my Blonde (aka World’s Best Traveling Buddy), she and I could experience them together, each looking upon those splendors for the first time. Few things are more valuable to me than those shared moments.

Once clear of the park entrance, I scouted out the border crossing at Cerro Castillo that I’d do the following morning, as I had no desire to revisit the Rio Turbio charlie foxtrot (Day 10). Heading south to Puerto Natales, I took a look back at the shrouded mountains of the park. Yup, it had mercilessly chewed me up and spat me out, reluctant to give up some of its wonders.

Its parting advice: put a whoooole lot more days in the quiver, next time you wander this way.

Leave a Reply to packmonster Cancel